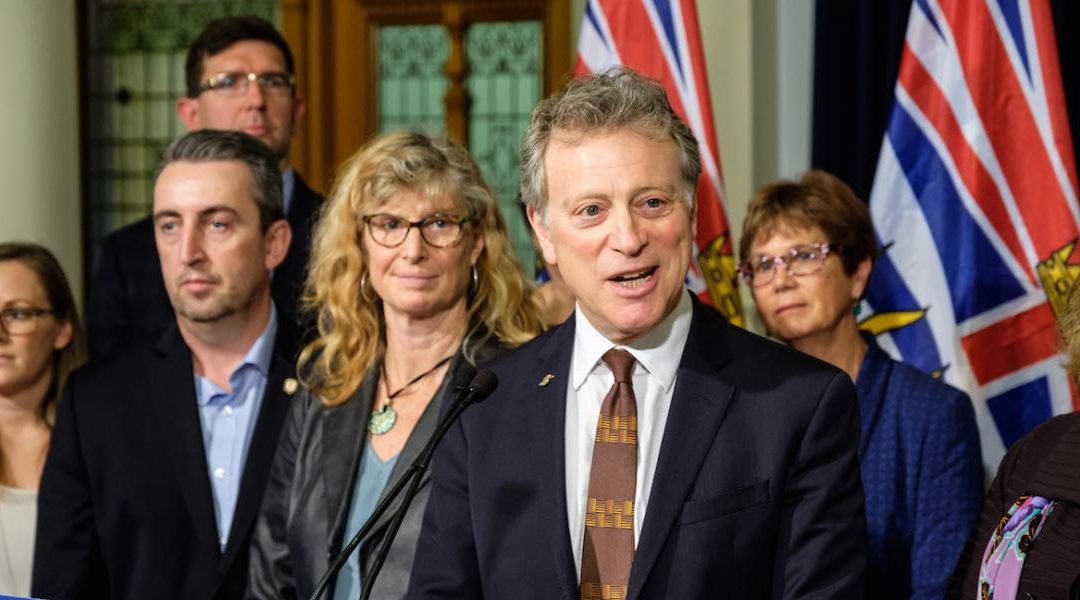 Is B.C. ready for some aggressive action on climate change?

The government is asking for public input on a series of intention papers that include ideas like banning the sale of gas and diesel cars by 2040, using more electric buses or even ferries, and labelling homes for their energy efficiency.

Ireland, the Netherlands, Germany and India have already either announced a ban on the sale of new gas and diesel cars or targeted 100 per cent clean vehicle sales by 2030, Scotland has done the same by 2032 and France and the UK by 2040

The ideas could become a “powerful suite of policies for reducing emissions” that will show B.C. is ready to “shift back into a position of leadership on climate change,” says Dan Woynillowicz, policy director at Clean Energy Canada.

Woynillowicz told me former premier Gordon Campbell is responsible for getting the ball rolling. In 2007, the Campbell government set a target of reducing greenhouse gas emissions (GHG) by at least 33 per cent below 2007 levels by 2020 and by 80 per cent by 2050. At the time, Campbell said the target was the most aggressive in North America.

Those targets have not been met. B.C. reduced emissions by only 4.7 per cent between 2007 and 2015, government data shows.

“At the same time, we had a growing population and increased economic activity, so without that sustained effort, that has led to emissions starting to creep up again.”

Gasoline and diesel cars could be banned by 2040

Under the proposals, automakers would have to make sure they sell a certain percentage of zero-emissions cars – 10 per cent by 2025 and 30 per cent by 2030. One idea is banning the sale of new gasoline and diesel cars by 2040.

Ireland, the Netherlands, Germany and India have already either announced a ban on the sale of new gas and diesel cars or targeted 100 per cent clean vehicle sales by 2030, Scotland has done the same by 2032 and France and the UK by 2040, the report says.

“These are the types of policies packages that we’re seeing in those jurisdictions that have really been at the leading edge of climate and energy policy,” Woynillowicz said. “They’re also looking beyond personal vehicles and looking at what they can do to encourage more electrification of everything from cargo trucks to ferries.”

Heyman said he has been told by auto manufacturers that the price gap between zero-emission vehicles and internal combustion vehicles is rapidly closing and that there may be no difference in price by 2025.

“Buses are a huge opportunity,” Woynillowicz said. “BC Transit is looking to replace almost half of its fleet over the next five years. Whether those purchases are diesel buses, diesel-electric hybrid or pure electric is going to make a significant difference to the emissions associated with the transit system in our province.”

Some critics, like Eric Doherty, a Victoria-based transportation planning consultant and president of Ecopath Planning, say the new transportation proposal is “weak, and incomplete – with more ideas promised later.”

He may be right, but we’ve got to start somewhere. Without a plan, strict targets and accountabilities, B.C. will never reach its targets. The intentions papers are a starting point.

“Obviously, the point of reducing emissions is to do our part to slow the advancing of climate change and ensure we don’t reach a tipping point,” B.C.’s Environment Minister George Heyman said. “It’s also to … look at how we adapt to those elements of climate change that are already upon us, whether it’s wildfires or floods or the movement of different species.

“We can’t undo what’s been done, but we can slow its progress.”

Both Woynillowicz and Heyman say the shift won’t slow the economy and may even boost it.

Opportunities for growth for those on the forefront

There are a lot of opportunities associated with the transition to clean energy and addressing climate change, and most of those will be found in jurisdictions that are on the forefront, Woynillowicz said.

Right now, within Canada, Quebec is leading the way, Woynillowicz said. In the rest of the world, California, the United Kingdom, Norway and China are at the forefront, he said.

“People don’t tend to think of China as a climate change leader, by virtue of the fact that there is a lot of greenhouse gas pollution in China, and it is still increasing, but that said, they are acutely aware of the challenge and the risk that that poses and I would say they’ve been the most aggressive of any nation when we look at the scale of investments that they’re making in both renewable electricity and electric vehicles,” Woynillowicz said.

Not only has China done a lot of work at home, the country also is striving to make sure that “when we’re all driving electric cars 10 years from now, that we are driving Chinese cars.” Canada and B.C. should be doing the same, Woynillowicz said.

Transportation, clean buildings and industry, which between them account for 89 per cent of B.C.’s emissions, are the subjects of the first three intention papers. Zero-emission vehicles and cleaner transit are the key ideas contained in the transportation paper.

“In terms of having the right policy package to put us on the trajectory to 2030, I think they’ve got most of the pieces here,” he said. “It really just then comes down to how successfully they implement them and how aggressive they are.”

Heyman wants people to know they don’t have to sacrifice in order to transition to a green future.

“We’re trying to initiate a discussion with British Columbians around a strategy to build a strong, diverse economy that will seize the advantages that are coming in a low carbon future,” Heyman said. “(Reducing emissions will) leave a better world for both children and grandchildren, but also … make life more comfortable and more satisfying for everyone.”

Have your say – the papers are available for discussion until August 24.