New Climate Change Report Should Be a Wakeup Call 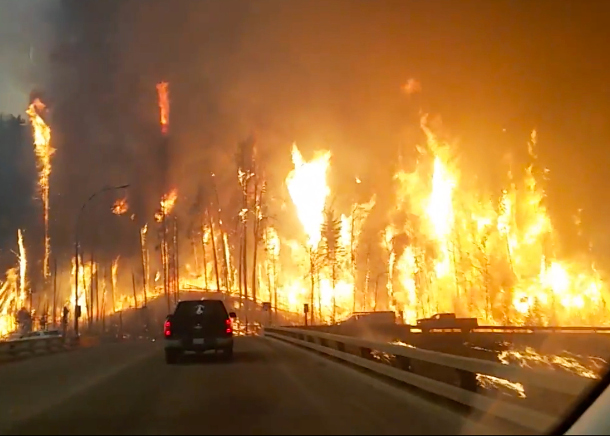 Canada is warming at twice the global rate, while right-wing politicians attack the carbon tax.

What do Ebola and climate change have in common? A large number of the people at risk don’t even believe they’re real.

And even a new federal government report warning that Canada is warming at twice the global rate is unlikely to change those people’s minds.
On Ebola, a survey published in late March in The Lancet Infectious Diseases reported that a quarter of the population in two towns at the centre of the disease’s hot zone in the Democratic Republic of Congo said the outbreak wasn’t real.

The poll also found that two-thirds of us think it’s more important to protect the environment than to promote economic growth. But sizeable minorities prefer growth and think the federal government is paying too much attention to climate change.

Those minorities are presumably the voters that Ontario’s Progressive Conservatives and Alberta’s United Conservative Party are appealing to by campaigning against the new federal carbon tax. Twitter was full of right-wing politicians like Ontario Premier Doug Ford and Alberta United Conservative leader Jason Kenney pumping gas on Sunday before the dreaded carbon tax kicked in on Monday.

So Canada’s Changing Climate Report is unlikely to change the minds of many in the Conservative base, federally or provincially. After all, it was researched and written on behalf of the Trudeau Liberal government, making it automatically suspect.

Granted, the Liberals’ “fundamentally incoherent” climate policies make the new report a bit of an embarrassment. They seem to think they can fund the transition to a zero-emissions economy by shipping bitumen to Asia and letting Asians do the emitting instead.

For BC, this is pancreatic cancer

Those who actually take the time to read the report, however, will find some serious and very coherent political and economic implications in it — especially for British Columbia. But it’s nothing we haven’t known for years. Let’s look at some of its key findings:

The Salish Sea and North Pacific will become deserts. Farmed salmon will die, and so will the wild salmon, and most of the other fish we eat. Our local resident orcas will die of starvation or attacks by transient orcas. Deprived of the salmon, black bears and grizzlies will diminish, and then the coastal forests and ecosystems that depend on soil enrichment by salmon carcasses.

Northern B.C. will especially affected, doing damage to our boreal forests. We have 75 per cent of the planet’s boreal forests, so that will be a planetary as well as a national disaster.

Compounding the problem, storm surges will aggravate rising sea levels, flooding low-lying regions like the Fraser Delta. Toxic chemicals and petroleum products will wash into the Salish Sea and Burrard Inlet, poisoning them far more seriously than if a tanker full of bitumen was to collide with the Lions Gate Bridge.

No waterfront? No trees? Great!

Real estate will be valued by its distance from water and the woods, not its nearness. The huge insurance agency Munich Re recently warned that climate change could make home insurance unaffordable. Last year’s California wildfires cost insurers US$24 billion.

On top of that, health care systems can expect more demands due to air pollution from smoggy summers. Medicare will be looking after everyone from asthmatic kids to urban firefighters seconded to fight wildfires and coming back with respiratory problems.

And that’s just the “terrible” scenario, which assumes that we escort the climate denialists to care homes and then work like hell worldwide to bring carbon emissions down to zero in 30 years.

Federal Conservative leader Andrew Scheer, Ford and Kenney will be doing their considerable best to push us toward 6.3 degree C and catastrophe. I have no idea what Ford and Scheer think about their own kids’ future (Kenney, to my knowledge, doesn’t have any). Maybe they think that at least Canada will cease to be an attractive destination for climate refugees.

For those of us who didn’t need yet another wake-up call, the report poses a political problem: How to turn our preferred political parties away from the catastrophic toward the merely terrible.

God help the few climate-aware Conservatives and Liberals. Their parties are locked into living in the now, when all that matters is this morning’s price at the pump so they can get to work and crank out more emissions.

The federal New Democrats’ policies are full of platitudes and promises not to export freshwater. If they pause to reflect, trapping our freshwater in huge reservoirs, and exporting some of it, may generate more revenue than bitumen ever could. (SNC-Lavalin would be delighted, no doubt, to bid on those reservoir contracts.)

The Green Party’s promises at least include some numbers: “An opening offer to reduce Canadian emissions 30 per cent below 1990 levels by 2030, and to 85 per cent reduction below 1990 by 2050 regardless of what other countries do; a commitment to push for the global reductions in greenhouse gas emissions that are required to achieve a target of 350 ppm to cap the maximum global temperature increase at 1.5 degrees.”

No one seems prepared to admit that we have launched an attack against ourselves and our planet. No one is prepared to teach our kids to accept a carbon tax as a stopgap measure before we start training them to survive on a Hothouse Earth.

The CCCR ends on a technocratic note. “Beyond the next few decades, the largest uncertainty about the magnitude of future climate change is rooted in uncertainty about human behaviour, that is, whether the world will follow a pathway of low, medium, or high emissions. Given this uncertainty, projections based on a range of emission scenarios are needed to inform impact assessment, climate risk management, and policy development.”

When climate change hit the Maya kingdoms over a thousand years ago, the Maya peasants couldn’t afford to feed their rulers any more. So they killed off their kings, priests and warriors and retreated to villages and small-scale farming. Our children and grandchildren won’t even have that option.

We are near the end of “emission scenarios” and “climate risk management.”