Climate change threatens ‘both the economy and the financial system,’ says Bank of Canada 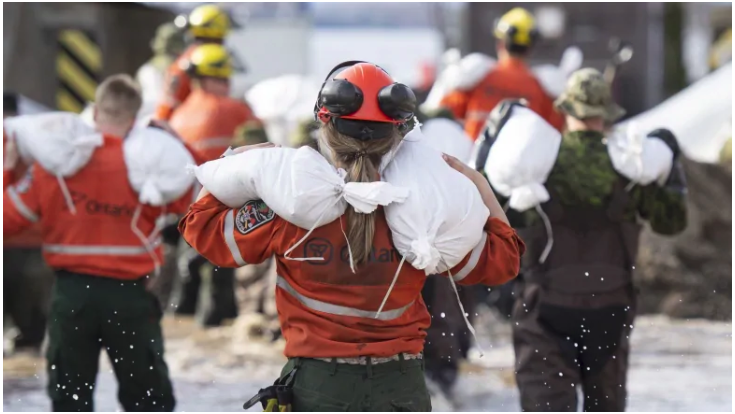 An Ontario Ministry of Natural Resources Fire Ranger carries sandbags to fortify a wall keeping floodwaters at bay along Alexander Street in Pembroke, Ontario on Saturday, May 11, 2019. For the first time ever, the Bank of Canada is releasing a report on the threat posed to Canada’s financial system by climate change. (Justin Tang/THE CANADIAN PRESS)

For the first time ever, the Bank of Canada has released a report examining the threat climate change poses to the country’s financial system.

The central bank’s annual financial system review (FSR), released today, analyzes the resilience of the country’s financial system, cataloguing the main vulnerabilities and risks facing it. Critics have been urging the bank to examine the impact of climate change on financial stability for years now.

“Climate change continues to pose risks to both the economy and the financial system,” the bank said in today’s review.

“These include physical risks from disruptive weather events and transition risks from adapting to a lower-carbon global economy. Economic activity and the environment are intertwined.”

The Bank of Canada recently announced it is joining the Network for Greening the Financial System, a worldwide forum of central banks and financial system supervisors looking to better manage the financial risks of climate change. The network launched in 2017.

“And so for two years, Canada has been absent from that international discussion,” said Kevin Quinlan, a consultant who focuses on climate change and responsible investment and an ex-chief of staff to former Vancouver mayor Gregor Robertson.

“Countries that have very different economies than Canada’s are really setting the agenda … and that’s a real disadvantage for Canada.”

Quebec Provincial Police officers carry Nadia Makhavekova to a boat so she can retrieve some belongings from her flooded home on Friday, May 3, 2019 in Ste-Marthe-sur-la-Lac, Que. (THE CANADIAN PRESS)

‘When the Bank speaks, people listen’

In late March, as it was joining the Network for Greening the Financial System, the central bank publicly committed to building climate-related risks into its FSR process and developing a multi-year research plan focused on climate change.

“The importance of climate-related issues for financial stability and monetary policy (has) become increasingly clear,” said Bank of Canada Governor Stephen Poloz at the time. “This is particularly true for Canada, where resources play a vital role in our economy and where the natural environment is a defining feature of our national identity.”

Experts argue the Bank of Canada is ideally placed to research and model the potential threats climate change poses to Canada’s economy and financial systems — not only to meet its own mandate of predicting economic growth and setting monetary policy, but also to help guide corporate Canada.

“We’re still at the very beginnings of modelling the impact of climate change on the economy … the Bank should obviously have a leading role in that,” said Céline Bak, president of Analytica Advisors and a senior associate with the International Institute for Sustainable Development.

“When the Bank of Canada speaks, people listen.”

Investing in an age of climate change

Canada made a commitment under the Paris Accord to reduce its greenhouse gas emissions and limit the rise of global temperatures to less than 2 degrees Celsius. Meeting that target requires a greener economy — and getting there will affect corporations and businesses tied to the fossil fuel industry.

The impact on Canadian firms could come though shifts in where Canadians place their investments and pension portfolios, and from government regulatory changes that constrict companies.

Even if Canadians continue to invest as they do now, they can’t make informed decisions about the security of those investments if they don’t know the degree to which their investments are exposed to the costs of climate change.

“Just getting the discipline within mainstream financial statements (on) what the impact of climate change is going to be on the company, and what the company’s impact on climate change is, should be a minimum standard,” said Bak, adding that transparency is the cornerstone of well-functioning capital markets.

But while some members of corporate Canada have started disclosing climate change risks to their shareholders, they’re not required by law to do so and there are no agreed-upon standards on how and what to report.

“Any financial reporting that a company does has to be audited. None of that exists with climate disclosures,” said Hugh Smith, an expert in environmental and social governance at Refinitiv, a financial market data provider.

“Companies highlight what they’re doing well. It tends to be very overly optimistic.”

Smith called for mandatory reporting and national standards, arguing that even ordinary investors can play a role in bringing that about.

“Capital has more power to make change than anything else,” he said. “(Climate change) is a material impact to the companies you’re investing in. If you ignore them, that’s just not prudent investing.”

Some argue that Canada’s stock exchanges could compel companies to report their climate change risk as a condition of being listed.

Another risk posed by climate change is infrastructure damage due to more extreme weather, such as fire and floods. A side effect of that is the exploding cost of insurance claims.

That impact on insurance companies has been the focus of the Office of the Superintendent of Financial Institutions, which regulates Canada’s banks, insurance and trust companies and pension plans.

But experts argue that the economic threats facing Canada go well beyond the physical impacts of climate change — that a resource-dependent economy is vulnerable to an eventual consumer-driven shift away from fossil fuels.

Which is why critics like Quinlan and Bak said they have been disappointed that the Bank of Canada has been so slow to take a leadership role on this issue, unlike European central banks. (The U.S. Federal Reserve has not signed on to the Network for Greening the Financial System.)

In April, Bank of England Governor Mark Carney argued in an op-ed in The Guardian that the financial community urgently needs to prepare for an “orderly transition to a low-carbon economy” to avoid a climate-driven “Minsky moment” — a sudden collapse in asset prices.

With so little modelling done, it’s difficult to estimate the financial impact of climate change on the economy of one country, let alone the world.

“There’s no sense of what the overall bottom line would be,” said Smith. “But that being said, it would be an absolutely massive number.”