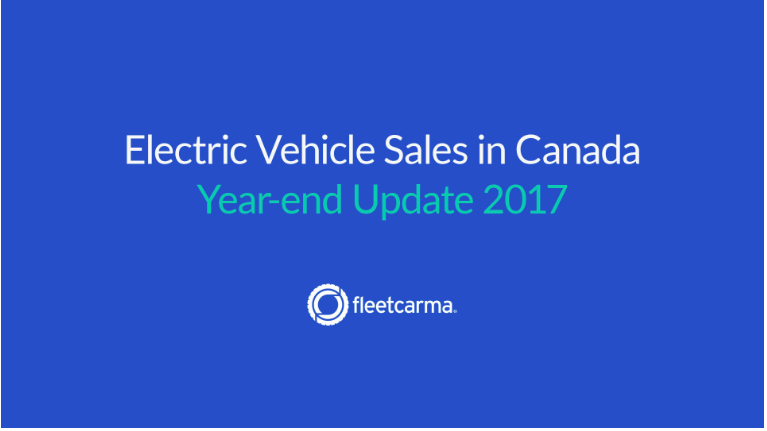 The final numbers for 2017 are in. First, we cover the Fast Five, then dive into the detail.

The total number of plug-in vehicles on the road in Canada is up to 47,800. Based on the sales trajectory, this number will cross 50,000 before the end of February 2018.

2016 was a benchmark year, until this year

2016 was a strong year for EV sales in Canada. Electric Vehicle sales had increased the most in that year than in any previous year. And the total number of PEVs on the road was at an alltime high of nearly 50,000 vehicles. Battery electric and plug-in hybrid vehicles were selling equal numbers of models. 2017 has continued that strength and set new records across the board.

Canadian electric vehicle sales reached an all-time high in 2017 with every previous sales record being continuously broken throughout the year. Comparing 2017 final numbers with the previous year reveals just how dramatic the increase in electric vehicle uptake was.

Plug-in electric vehicle (PEV) sales numbers for 2017 ran up to approximately 18,560 vehicles, an increase of 68% over the previous year.

Comprising the number of PEVs are two types of EVs, Battery Electric Vehicles (BEVs) and Plug-in Hybrid Electric Vehicles (PHEVs). National BEV sales increased at nearly double the rate of PHEV sales. A total of 9,840 BEVs were sold in Canada in 2017, an increase over the previous year of 92%. PHEV sales across the Country totalled 8,730, an increase of 48% over the previous year.

Supporting the growth in annual numbers were consistently strong sales each and every months, this is not a fluke. Monthly averages were up, Monthly highs were up, even Monthly lows had increased by quite a bit.

From sea to shining sea, EV uptake has finally and officially caught on across Canada. The big three Canadian Provinces led the Nation in overall sales. However, size isn’t everything, some less-populated Provinces led in the overall increase.

In 2016, Ontario increased its electric vehicle targets and announced new support programs. In 2017, it appears that those measures are having an impact. In terms of new EVs sold, Ontario has taken the first place seat from neighboring Quebec for total annual sales for the first time. Ontario’s annual PEV growth has increased by 120%, which translates to 7,500 vehicles compared to 3,400 in 2016. Quebec is still the province with the most number of PEVs; however, Ontario is closing the gap due to its strong sales growth.

Quebec had EV sales exceed 2% of all vehicle sales for the last four months of the year and in total 7,200 new PEVs met Quebec roadways, a 44% increase over 2016 sales of 5,000 vehicles. British Columbia saw a higher than average increase in the annual rate of adoption in 2017 of 53%. Their PEV sales for 2017 were approximately 3,300 vehicles vs 2,100 the previous year.

The highest rate of increase for PEV adoption occurred in New Brunswick, with a 124% rate of increase. A total of 53 electric vehicles hit the road for the first time in that Province compared to 24 in the previous year.

Splitting PEV sales by type – BEV and PHEV – begins to tell more of the story behind the increase in electric vehicle adoption across Canada. The figures and growth for all-electric BEVs had reached a milestone in 2017. It seems as if the market and manufacturers have finally come to an understanding. With newer models of all-electric BEVs now able to exceed the desired range capacity for consumers, they have begun flying out of dealerships.

2017 is the first year in which BEV sales exceeded PHEV sales across the Country. Not only that but the rate of increase in overall sales is nearly double for all-electric models. Ontario saw a 148% increase in BEVs compared to 98% for PHEVs. Quebec, 73% BEV to 23% PHEV. BC, 68% BEV to 30% PHEV. On average, the BEV market grew at double the rate of the PEV market, which is also growing. In an expanding electric vehicle marketplace, all-electric models are clearly on a break-away.

2017 saw more EV models come to market than ever before. Typically the market was overwhelmingly receptive to new vehicle models, often outselling updates to models which had been on the market for a number of years already. It seems consumers were waiting for new technology and specific features, namely longer range at a reasonable price.

Point in case is the Chevrolet Bolt EV which came to market with model-year 2017. There were over 2,100 Bolt EVs sold to Canadians, making it the most popular BEV model on the market.

The Bolt EV was so popular and fit the market so well that it beat out competitor models like the Tesla Model X, Model S, Nissan Leaf, and Hyundai Ioniq BEV. Each of these existing models managed to hold their own. The Tesla Model X and S increased sales by 770 and 200 units respectively. The Ford Focus also increased EV model sales by some 400 units. New model entries, Hyundai Ioniq and Volkswagen eGolf sold 890 and 530 vehicles respectively.

The Chevrolet Volt continues to dominate the plug-in hybrid section of the market. Increasing sales 24% over last year to 4,300 or by 830 units. New entries to the market include the Prius and Prime, counted here together account for some 730 new plug-in electric vehicles.

There are a growing number of electric vehicles on the road, there are also a huge number of ICE vehicles already on the road. Considering the 100-year head-start of combustion engine technology and supporting infrastructure and the comparatively small number of EV sales doesn’t look as bad after all. To understand the rate of EV adoption, we track the number of EVs sold as a percentage of all vehicle sales.

The numbers above are derived from multiple sets of input data. These are summarized below.

What is the source of the data?

Automaker Datasets
Some data is provided by automakers.

Editor’s Note:
In cases where a new dataset is received that enables further accuracy, these posts will be updated to include that new data.