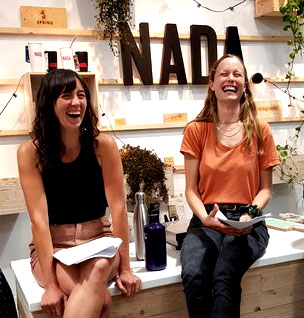 Brianne Miller and Alison Carr, co-owners of Nada at their First Anniversary Party

On last Thursday night, June 20 I dropped by the 1st Anniversary celebration of Nada, the package-less store at Fraser and Broadway. The founders of Nada are two young women, Brianne Miller and Alison Carr, refugees from graduate studies in marine biology, overcome by the impact of plastic on marine life, now millennial entrepreneurs. Over their first year they grossed $1 million and broke even at 9 months. The Nada staff has increased from 4 to 24. Nada has cut the usual grocery store waste from 10% to under 1%. The store donates 1% of its revenue to the Georgia Straight Alliance, a non-profit dedicated to species preservation in the Straight.

About 70 people attended the celebration. After some initial introductions to Nada by Brianne and Alison, major supplier Left Coast Naturals offered a fascinating presentation about their history and philosophy. A local recycling company representative spoke followed by Nada’s senior team. To recycling add re-use and refuse to your lexicon. By the way, nine percent of all plastics produced since the early 1950s have been recycled, Brianne noted….and the rest is sitting in landfills and in the ocean. Plastic takes up to 1000 years to partially decompose in landfills. Plastic bags take 10-1000 years to ‘decompose’, while plastic bottles can take 450 years or more. In reality, plastic doesn’t ‘decompose’ altogether, it only ever breaks down into smaller and smaller pieces – to the point that they’re so small that we often can’t see them, but they’re still there eventually lodging in the bodies of the creatures around us and in our own bodies. As we have seen lately, the days of shipping all this mess to Indochina, China and the Philippines are over.

At Nada, everything, including toothpaste and chocolate, is sold package-free. Shoppers can buy small quantities if they choose. Customers bring their own containers, buy reusable ones at the store or take some from a stack that have been cleaned and sanitized. The store has an innovative system that employs a digital scale to weigh and tag containers before shopping begins. Once a container is tagged it does not need to be weighed again. Suppliers also reflect the same approach: A local coffee roaster, for example, delivers beans in refillable bulk containers. No one time plastic containers anywhere. Nada means nothing….and a whole lot.