More Incentives for BC Drivers to Go Electric 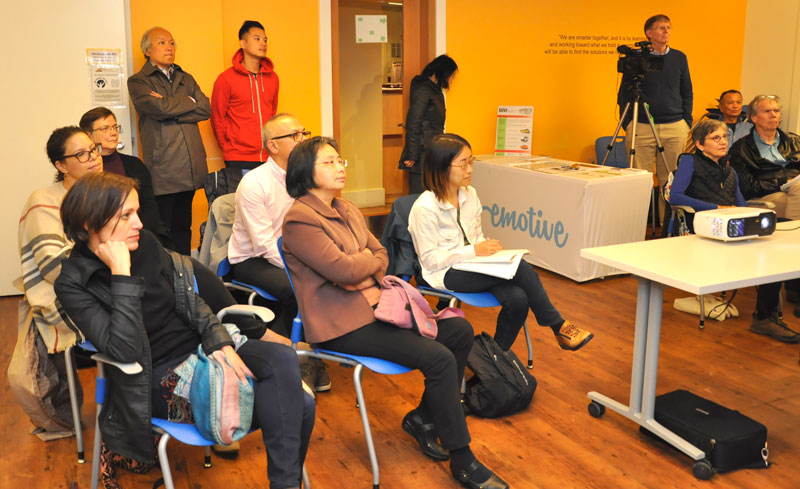 Are you thinking of buying an electric vehicle (EV)? Well, the province of British Columbia has just added a new incentive for higher-level charging stations at your house, condo/apartment building or workplace. It’s part of the BC Government’s plan to ensure that every new car sold in the province will be a zero-emission vehicle by 2040.

It’s another positive step in switching to more environmentally friendly cars according to Sara Fralin of Emotive, a campaign by the Fraser Basin Council, government, community groups and academic institutions, to create greater awareness of electric vehicles. Fralin was speaking last night at the inaugural presentation of GTEC’s Neighbourhood Environmental Education Project. She notes that 30 per cent of EV owners cannot charge their vehicles at home. Instead they rely on public infrastructure.

The latest incentive is on top of others offered by both the provincial and federal governments. These programs save drivers thousands of dollars depending upon the type of electric vehicle. Those vehicles eligible for rebate programs are listed here.

Fralin says the incentive programs are definitely a factor in the remarkable growth of electric cars. By 2018, there were 70, 000 EVs on the road in Canada, a 140 per cent increase over the previous year.  Over the same period globally, the spike in sales is 46 per cent.

Fralin expects electric pickup trucks to be the next big surge in sales. Also, look for more specialty electric vehicles in the future such as school buses and Zambonis.

The two commonly asked questions of Fralin are what is an electric vehicle and how do I charge them?

There are three main types: Plug-In Hybrids powered by gas and electricity and Battery Electric Vehicles which are fully electric. Also, there are fuel cell vehicles powered by Hydrogen but their manufacture is in its infancy. In case you are wondering, conventional hybrids are not considered an electric vehicle because they cannot be externally charged.

Fralin lists several benefits of owning an electric vehicle such as superior performance, reduction in the emission of greenhouse gases, low maintenance costs, savings on fuel costs and the allowance to operate in HOV lanes.

The other major question is the availability of public charging stations. It’s especially relevant for drivers considering long distance trips. There are more than 1,000 stations in BC with the majority in Metro Vancouver, ideal for commuter trips.

As sales of EVs surge, there will be a greater need for more public charging stations. Fralin is optimistic more are on the way as businesses see opportunities such as Petro-Canada which is adding more than 50 fast charging EV stations coast to coast.

It’s not just major urban centres attracting electric vehicles. Fralin points excitedly to a club of 20 EV owners in the city of Prince George in northern BC. She says the club members are enthusiastic advocates for electric vehicles. They and other EV owners volunteer with Emotive as Electric Vehicle Ambassadors.  They bring their vehicles to home shows, farmers’ markets and other events where they answer questions from the public and even take people for rides.  Fralin says it is one of the best ways for people to learn about the positive experience of owning and driving an EV.

One of the reasons Emotive arranges for test drives at events is the fact there are often few EVs at auto dealership lots. In other words, there is no assurance that EVs on the lot can be purchased. Supply is simply not keeping up with demand.  Just one more sign of the growing interest in electric vehicles and green technology and the need, in BC, of more pressure on dealers to keep up with the demand.