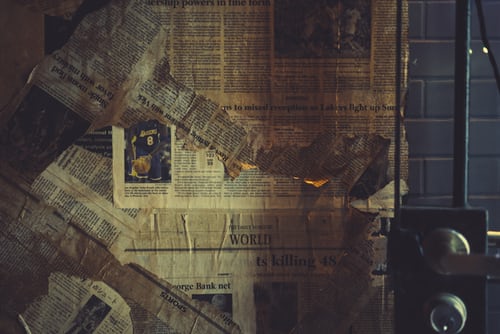 Today’s aging generation is the first to look into an uncertain future for the planet and to wonder if it has left the world in a terrible mess for subsequent generations, to wonder if like so much flora and fauna around us the human species is actually on a path to extinction, to live in the knowledge that their hands and not fate shaped this uncertain destiny.

Here are the facts: The Earth has warmed 1 degree Celsius (1.8 degrees Fahrenheit) since the 19th century. This warming is mostly caused by the carbon dioxide emitted by extensive use of fossil fuels in industry, agriculture and transportation.

One of the recent reports of the United Nations Intergovernmental Panel on Climate Change (IPCC), made up of many of the world’s leading climate scientists, addressed the relative consequences of an increase of 1.5 or 2 degrees Celsius. This report was released during the fall of 2018 – https://www.ipcc.

Though ostensibly revering science and technology, nations have delayed curbing their greenhouse gas emissions to the extent that warming of 1.5 degrees Celsius (2.7 degrees Fahrenheit) is now all but inevitable. Two degrees Celsius (3.6 degrees Fahrenheit) or higher this century is more likely. Currently, we are on the path to an increase of average temperatures globally of 3.2 C.

Holding warming to 1.5 degrees requires an immediate transformation of the global energy system. Global greenhouse emissions need to fall in half within 12 years and zero out by 2050. To stay below 2 degrees, emissions have to decline to zero by around 2075. Virtually all of the coal plants and gasoline-burning vehicles on the planet would need to be quickly replaced with zero-carbon alternatives. In addition, the world has to develop and deploy carbon sequestering technology to remove billions of tons of carbon dioxide from the atmosphere each year. Other than carbon sequestering technologies, still untested at scale, greening the planet with trees and edible crops is the best available alternative.

So the question is, what to do in the face of a seemingly overwhelming set of facts along with some pretty horrible long term consequences. From the point of view of an elder riven by shame or tempted by indifference what is the pathway to hope. In answering this question, I am borrowing liberally from an article in the Sunday New York Times Review of Books by gardener, Emma Marris – https://www.nytimes.com/2020/01/10/opinion/sunday/how-to-help-climate-change.html Marris is the author of “Rambunctious Garden: Saving Nature in a Post-Wild World.”

Marris begins with a really important point: It is true that each and every one of us contribute to the climate crisis. However, that’s in part because the rich and powerful have constructed systems that make it nearly impossible to live in sustainable ways. Our economic systems require most adults to work, and many of us must commute to work in or to cities intentionally designed to favor the automobile. Unsustainable food, clothes and other goods remain cheaper than sustainable alternatives.

Marris quotes the climate essayist Mary Annaïse Heglar, “The belief that this enormous, existential problem could have been fixed if all of us had just tweaked our consumptive habits is not only preposterous; it’s dangerous.” It misleads us into thinking that we have agency only by dint of our consumption habits — that buying correctly and recycling diligently are the only ways we can fight climate change. The fact of matter is that compared to the carbon emissions of the US military, for example, not to speak of industry and office buildings, collectively, ‘we ain’t nothing.’ Her point is that becoming individual eco-saints alone will not get the job done. Institutional change on a large scale is required. So, step one, is to ditch the shame we all feel about the saran wrap on the sandwich which just bought at Whole Foods and the flight to Italy last summer. Eventually, shame will make us miserable and immobilize us.

The next step is to work with others. What widespread community based change can contribute is an upsurge of energy, awareness and pressure on politicians at all levels of government to get with the program. Community based change amplifies individual efforts while it restores connection to others, another victim of the economic system that needs overhauling.

In conclusion, the prescription is this: ditch the shame and, while contributing as an individual the best you can, work with others to change the institutions of the society and finally, a key point, ‘know what you are fighting for.’ We are not trying to the throw civilization back into the Dark Ages or to an idealized hunting and gathering past. We want to create a beautiful, harmonious, just and equitable world.

Here is my vision:

On a good day I see the Vancouver of the future with most streets as community gardens, bike lanes weaving their way through the city, a few automated electric vehicle corridors linking widely separated neighbourhoods, an expanded Skytrain system, food hubs in each neighbourhood, ‘packageless’ stores and cottage industries dotted throughout an increasingly treed urban landscape.

Neighbourhood Houses and Community Centres have become the focus of a reviving community feeling and there is music, dance, poetry and visual arts happening everywhere.

‘You may say I’m dreamer, but I’m not the only one’