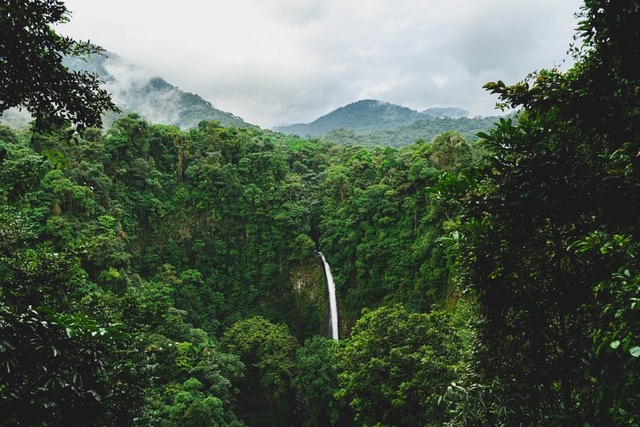 The three-toed sloth moves slowly and deliberately, its nails curling around the branch with seemingly little effort. It looks over at me curiously as I gaze at it through the telescope. “What’s your rush, human?” his eyes say. Sloth has moved so slowly throughout his life that algae has grown on his fur. He returns to the task at hand, now arriving at the trunk. Sloth is predicting that rain is coming and he’s descending, taking cover. And he’s correct, the skies open up in the next few minutes, drenching this forest with life, in liquid form.

I’m in La Fortuna, on the north side of an inactive volcano, in the lush mountains of northcentral Costa Rica.

This encounter with the Great Mystery would not have happened without my guide, Geovan Bogarin. Having arrived at night, on waking, I realize my cabin is at the edge of a trail bearing his name, the Bogarin Trail. I stumble upon his guide stand and he takes me on a tour of the land.

Geovan explains on our walk through the jungle that 18 years ago, this was a cattle field, like the one on the western border of this land. After fleeing the nearby Arenal volcano as a child, Geovan arrived here later as an adult, and started planting native jungle plants – mostly trees. After almost two decades of tending to this land, nurturing its life, it is now home to countless birds, including rainbow toucans (known to Geovan affectionately as “Fruit Loops”), 35 resident sloths, smiling caymans, and a variety of stunning colorful and somewhat-poisonous-to-humans frogs.

Geovan has a relationship with these beings. I look up and see only an indecipherable but beautiful mass and tangle of leaves and vines. He slowly sets up his telescope on its tripod, makes some adjustments to the dial, and invites me to look through. Magic: a bright iridescent bird, perfectly framed. I peer into the forest with the naked eye again – nothing. Back to the telescope – it’s peering at me now. I’m grinning from ear to ear.

He collapses the tripod and on we hike – coming now across a wake of vultures, feeding on a dead baby sloth in the middle of the path. Geovan shrugs, saying “this is the way of nature. Babies let go of their mama and mama doesn’t come down to save them. They are not strong enough to survive, the next one might be. They will breed and the sloths get stronger. This is the way of nature. It’s not for us to interfere.”

We hike on, and Geovan digs through some leaves and returns with a bright orange poisonous dart frog with blue legs. “This one is called ‘blue jeans’,” Geovan breaks into a smile. Then his face darkens, he stumbles, appears to faint. I lunge forward to catch him. He breaks into laughter. “Got you!” Yes, he did. Geovan escorts the frog back to its home under the leaves, and washes his hands in a little creek. “Not so bad if you just wash your hands right away.”

I’m here in this thriving rainforest, aware of the contradiction of consuming fossil fuels to get here. Aware of the wildfires burning in Australia, innocent animals dying, and others fleeing, from humanity’s excesses. A locust plague in East Africa of biblical proportions. Back home, Vancouver buried in an unusual amount of snow. Wet’suwet’en land defenders, Indigenous elders and many, many young persons, taking a stand up north against a natural gas pipeline through their unceded territories. A Prime Minister obsessed with forcing a pipeline through unceded indigenous territories, carrying one of the dirtiest forms of oil, bitumen.

Geovan faces a seemingly untenable task of rewilding the world. And yet, it’s a noble task worth undertaking, much like a Boddhisattva’s impossible vow to save all sentient beings.

I’m crying now, grieving this dying earth. This living force our ancestors were in relation with. A relationship banished by us sending God away from the earth to heaven centuries ago. Ruptured relations, lineages, and ancestors – human and non-human – lost and forgotten. Longing to be re-membered.

Much of our efforts on climate change are focused on technical innovations to reduce carbon output, capture carbon, develop new ways of electricity production, block out the sun. It’s based on status quo or even increased consumption.

What we’re not talking about enough is changing the story of our relationship with the earth. For a few millennia now, the dominant story has been that the earth is an inanimate resource, to be exploited for human benefit. We have been living a story that, at best, the world is an inanimate mass to be managed, and at worst, that this world is disposable.

What if we re-storied our relationship with earth? What if our guiding story was that everything was sentient? What if we talked with nature, gave thanks to nature, made offerings to nature? What if we remembered that we’re not in nature or out of nature, we are nature. There’s no separation. Everything is connected and interdependent.

What a mystery, to be alive in a human mind-body at this particular time in history, with humanity on the brink of destroying all beings, all life, through endless ravenous consumption. To be awake in this body/mind. Never before has there been such danger. And never before has there been so much awareness of, and care for, others outside of one’s immediate community. Never before have we seen this scale of resistance, solidarity, and dedication to mass transformation.

Being here, on this land, I’m falling in love. I laugh out loud from my cabin door at the impossibly strong downpours happening hourly – wild, exciting, slightly terrifying. I’m shocked by the colours of the fluorescent green tree frog with the orange digits and bright red eyes.  I’m grieving this dying earth yet wanting to protect and to cultivate wildness. In these poignant moments of new experiences and reflection, I am re-storying, and restoring,  my relationship with nature, alongside my new friend Geovan.

Brian Dean Williams (MA, RCC) is a therapist, Buddhist meditation teacher, and activist who lives, works, and plays on Coast Salish Territories with his family. Brian has a busy practice in counselling, leading retreats, and workshops. When not working, he’s active as a dad, trail runner, gardener, cyclist, and community organizer