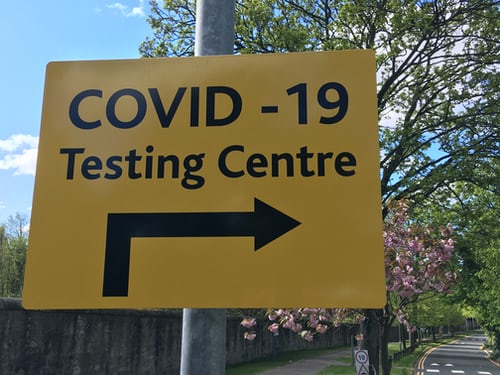 My previous posts have included some rather basic analyses of the www.worldometers.info data on COVID-19. I have focused mainly on total cases and deaths in various countries, making comparisons and trying to discern trends in the trajectories of the coronavirus. Until now I haven’t given a lot of attention to the testing statistics. But at this stage of the pandemic, it may be useful to take a closer look at testing.

Most COVID-19 diagnostic testing involves taking a deep nasal swab and analyzing the results in a laboratory for the presence of the virus, using nucleic acid technology. A number of labs have been approved for this purpose. (The White House, after learning of some positive cases close to the President and VP, is using a “quickie” on-the-spot test whose accuracy has been questioned.) Also, serological tests are being developed to detect virus-specific antibodies in the blood of persons who have recovered from the disease, and may have gained immunity.

Of course testing is especially important to help identify and isolate persons with mild or nonexistent symptoms and their contacts, in order to prevent the transmission of this very contagious respiratory infection.

The first obvious observation from the Worldometers testing data is that there are huge differences between countries in the quantity of virus testing to date. Some smaller and relatively affluent nations have tested their populations intensively, e.g. Iceland and UAE (16% each), Bahrain (13%), Luxembourg (9.6%). Some highly populated, less affluent countries have tested only about one per thousand residents, e.g. India, Mexico, Bangladesh, Indonesia. Most of the “developed” world is currently in the 1-to-6% range.

India has one positive case for every 2.5 tests, which suggests that only hospital patients (and maybe hospital staff) are being tested. Mexico’s tests-per-case quotient is 3.5. Brazil is another low-test country at 3.5 tests per 1000 citizens and tests per case of only 3.5. We can expect a huge uptick in cases (and deaths?) from all three of these countries.

Another consideration is the timing of testing. Most of continental Europe was overrun with COVID-19 cases before they could ramp up their testing regimes to limit community spread. In similar fashion the USA and the UK are now playing catch-up with their testing volume, and paying the price in lost lives. By contrast the UAE, Qatar and Singapore appear to have gotten out in front of the pandemic with proactive testing. Their death rates are minuscule at this point.

Russia will bear watching in this regard. The Eurasian colossus has been testing like mad recently (4.5% and counting), and logging 10,000+ new cases a day for the past two weeks. Are these mostly at-large tests or hospitalizations? Russia’s very low case fatality rate (1%) suggests the former, but can we trust their numbers?

Mideast neighbours Turkey and Iran are almost identical in population at 84 million each. These two offer an interesting comparison re testing and the progress of their coronavirus curves. Turkey has done more than twice as much testing as Iran (though not a lot at 1.8%), and has recorded 30,000 more positive cases but 3,000 fewer fatalities. Of course these differences could be explained by the variance in medical systems and/or preventive measures between the two countries. However Iran had a much steeper surge and a twice-as-high peak, and now seems to be in the midst of a second wave. Its desultory testing history may have contributed to these outcomes.

The American states that have been hit hardest by COVID-19 — New York, New Jersey, Connecticut and Massachusetts — have understandably done the most testing: 4 to 7% of their residents, compared to the national figure of 3.2%. But as the country opens up, there is concern about other large states who have tested less and perhaps don’t have adequate diagnostic supplies on hand. For example California, Pennsylvania, Texas and Florida are all below the 3% testing threshold at present.

So as many US states reopen, the extent of infection is unknown and the risks increase. Meanwhile there is considerable resistance to wearing face coverings and maintaining physical distancing. One wonders how many millions would follow the President’s example if he deigned to wear a mask in public settings.

The global coronavirus runaway train keeps rattling along, chalking up 90,000 new cases and 5000 deaths every day. The USA continues to account for one-third of these daily.