The Climate Crisis for the Ordinary Person 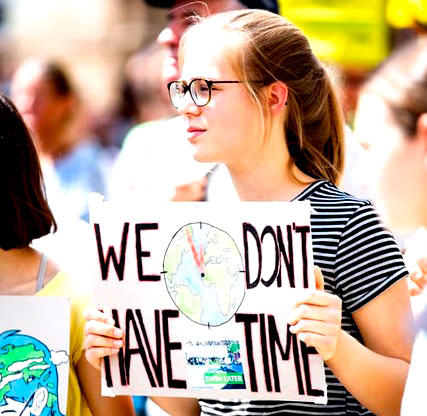 At GTEC’s recent Town Hall I was surprised to meet several people who told me they were confused about the climate crisis. What is the situation exactly? Where do we stand? When I thought about the flood of information that we encounter everywhere we turn from social media to the news on TV, I understood.

The Earth has warmed 1 degree Celsius (1.8 degrees Fahrenheit) since the 19th century. This warming is mostly caused by the carbon dioxide emitted by extensive use of fossil fuels in industry, agriculture and transportation.

One of the recent reports of the United Nations Intergovernmental Panel on Climate Change (IPCC), made up of many of the world’s leading climate scientists, addressed the relative consequences of an increase of 1.5 or 2 degrees Celsius. This report was released during the fall of 2018 – https://www.ipcc.

Each time the Earth heats up an extra half-degree, the effects aren’t uniform. Some regions, such as the Arctic, will heat up two to three times faster. For example, the warming of the Canadian Arctic currently exceeds the global average.

The odds of extreme weather events like severe heat waves or powerful rainstorms also don’t increase uniformly with each half-degree. The number of extremely hot days around the world, for example, tends to rise exponentially as the global average temperature increases.

Tipping points refer to the point at which a series of small changes or incidents add up and cause a larger, more significant and typically irreversible change. Tipping points are difficult to predict because they happen when many factors come together.

The recent IPCC report highlights the possibility that even modest amounts of warming may push both human societies and natural ecosystems past certain thresholds where sudden and calamitous changes can occur. For example, parts of the world may become uninhabitable causing mass migrations of people, animals and insects.

Another example of a tipping point is the irreversible disintegration of the vast ice sheets on top of Greenland or West Antarctica. These ice sheets could start to destabilize at 1.5 to 2 degrees of warming, resulting in many metres of sea level rise worldwide for centuries to come.

Holding warming to 1.5 degrees requires an immediate transformation of the global energy system. Global greenhouse emissions need to fall in half within 12 years and zero out by 2050. To stay below 2 degrees, emissions have to decline to zero by around 2075. Virtually all of the coal plants and gasoline-burning vehicles on the planet would need to be quickly replaced with zero-carbon alternatives. In addition, the world has to develop and deploy carbon sequestering technology to remove billions of tons of carbon dioxide from the atmosphere each year. Other than carbon sequestering technologies, still untested at scale, greening the planet with trees and edible crops is the best available alternative.

This week, the United Nations Environment Programme (UNEP) released its annual Emissions Gap Report compiled by 57 leading scientists from 33 institutions across 25 countries. It calls on governments to act immediately, within the next decade, to limit global warming to 1.5 C or 2 C by 2100. Currently, we are on the path to an increase of average temperatures globally of 3.2 C.

For a New York Times article that compares the compares the relative effects of increases in global warming of 1.5 versus 2 2 degrees Celsius see https://www.nytimes.com/interactive/2018/10/07/climate/ipcc-report-half-degree.html